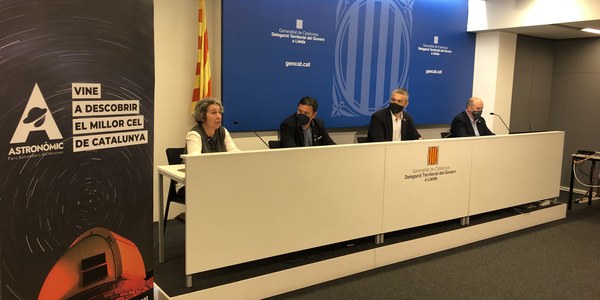 Mireia Burgués, explains that it is an “ambitious and transversal” program that “will help to root the population in the territory”

The Parc Astronòmic del Montsec (PAM) will kick off the new 2022 season this Friday, February 18, with the premiere of two new screenings at the planetarium and the resumption of day and night visits for groups and families. The facility, located in the municipality of Àger, has prepared a proposal of activities and events in the middle of nature to bring science closer to the public and make known the spectacular sky of the Sierra del Montsec.

This was announced this Friday morning at the presentation ceremony held at the Government Delegation in Lleida by the Mayor of Àger, Mireia Burgués; the president of Ferrocarrils de la Generalitat de Catalunya (FGC), Marta Subirà; the Government Delegate in Lleida, Bernat Solé; the president of the Noguera County Council, Miquel Plensa, and the director of the Astronomical Park, Salvador J. Ribas.

Burgués highlights the capacity of the PAM to fix the population in the territory The mayoress of Àger, Mireia Burgués, has been very satisfied with this “ambitious and transversal” program that will serve to attract the most familiar public and will help to give to know even more about this wonderful territory that we have ”. Burgués explained that it is a “luxury” to have this equipment that “helps to root the population in the territory and create new opportunities to overcome depopulation.” For this reason, the mayoress of Àger recalled that “to believe in the possibilities of Àger is also to bet on La Noguera, the territory of Lleida and the whole country”.

For her part, the president of FGC, Marta Subirà, explained that this new season will bring the equipment back to normal and that visitors can “reconnect with science and astronomy in the middle of nature, with the incomparable landscape of Montsec ”. Subirà explained that in 2021 the PAM increased its visitors by 63% compared to 2020, and for this season they expect to exceed 30,000 visitors and thus recover the figures for 2019.

In turn, the Government Delegate, Bernat Solé, highlighted the Astronomical Park as “the best place for observing the sky in Catalonia”.

For Solé, this facility represents a model of sustainable tourism that “incorporates all the values ​​of the territory” and has highlighted the need to strengthen it as a tourist destination of reference for its natural and heritage values, which will also lead to social and economic revitalization of the region, he explained.

The president of the Noguera County Council, Miquel Plensa, has been willing to collaborate with the Astronomical Park and expects a better season for the equipment, with more visitors and the recovery of school excursions.

Two new screenings, the news of the PAM this season

The director of the Parc Astronòmic del Montsec, Salvador J. Ribas, announced the news of this season, and explained that among the wide range of events planned, the screening of the new family ‘Beyond the sun’, which aims to encourage scientific dissemination among children. A new film, ‘Unveiling the Invisible Universe’, will also be screened at the general night tours, showing the most advanced technologies currently used to observe the most hidden corners of the universe.

‘Music under the Stars’ series and Astronomy Festival

Another of the highlights of this year is the programming of the 12th edition of the cycle ‘Music under the Stars’, which extends to five evenings of concerts to respond to the great reception that this proposal gets year after year. The meetings of the cycle, with a monthly frequency between June and November, form a unique experience that combines a night astronomy session with a concert in the space of the planetarium. The initiative also allows the projection of Catalan groups and songwriters in an unusual space.

At the same time, during 2022, the Astronomy Festival will also be scheduled, which will change its date and will take place from October 28 to November 1. This festival, which is held annually and this year reaches its 8th edition, has a wide range of scientific, cultural and leisure activities aimed at family audiences with the aim of bringing science closer to society and to promote the knowledge of Montsec as an astrotourism destination.

PE: Attached are photographs of the press conference that took place this morning at the Government Delegation of the Generalitat in Lleida and statements by the mayoress of Àger. You can download it all in high quality through this link: https://we.tl/t-MhP2nEcOju